This beautiful historic house in Much Marcle, Herefordshire, is a living monument to much of England’s history. It remains a living home, and not a museum, although it contains a wealth of period furnishings, artifacts, paintings and decorations.

The family Trust which presently run Hellens (and her sister property Southside House), serves both the community and the general public, particularly in three areas: with music, (Hellensmusic, and events), in literacy and language (programmes associated with our patronage of the Ledbury Poetry Festival) and with the environment (our Back2Wild project and the Hellens Garden Festival). We work to provide projects and activities for schools and students of all ages, through the two properties, not forgetting adults and pensioners! As well as the Chairman of the Trust and his family at Hellens, there are five other resident families who undertake the day-to-day running of the Charity here.

Our objectives are to protect and maintain two houses of historic interest – Southside House, Wimbledon, and Hellens Much Marcle, Herefordshire – and to make both houses available for educational and cultural activities relevant to the local communities.

Both houses are regularly open to the general public on payment of a nominal entrance fee, which covers a guided tour. Specialist groups are catered for with organised tours.

The Charity Trust is engaged in a number of non-profit making areas, principally in the fields of music, literacy and language, and the environment and both our Hellensmusic and Hellens Garden Festival events envelop these principles. We facilitate activities that are designed to encourage vulnerable adolescents back into our natural environment with our Back2Wild programme and promote environmental sustainability with Hellens Garden Festival.  At both houses, and through outreach, we inspire primary and secondary children with poetry and with music; children are integral to Hellensmusic.  Senior groups share in the work and pleasures of the Trust at both houses too, for example, NADFAS. In all cases this is with emphasis placed on activities of benefit to the local community.

In order to achieve its objectives the Trust has working party trustees who, with the administrators and curators of both houses, are actively engaged in promoting to visitors and organising special events, whilst ensuring that the properties are maintained in good order and that their unique nature is not destroyed by excessive exposure. 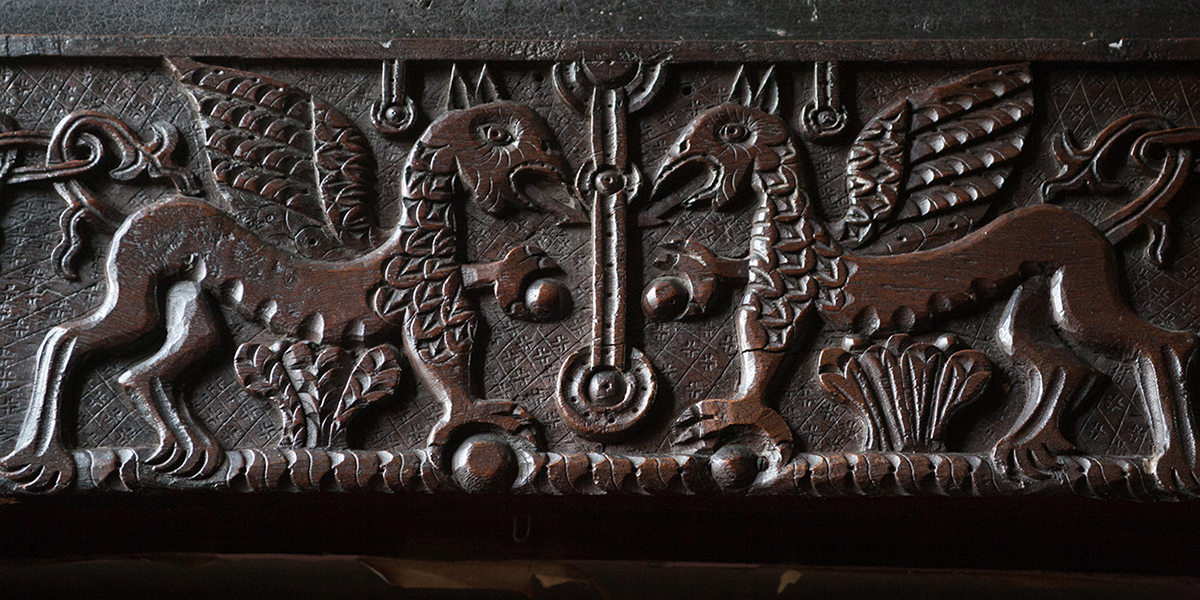 In 1096 the Manor was granted to the de Balun family who witnessed the signing of the Magna Carta by King John. Thereafter by marriage, deed and gift it passed through the powerful Mortimer family to the Lords Audleys by 1301, who were created Earls of Gloucester in 1337. A nephew, James, one of the Black Prince’s 12 boon companions, rented the Manor yearly from his uncle the Earl for a pair of silver spurs. He eventually leased it to Walter de Helyon whose family gave their name in time to the house. Their descendants still live here, and Walter’s effigy can be seen in St Bartholomew’s Church.

(Further information can be found at muchmarcle.net)

Among Hellens’ attractions are the haunted rooms prepared for Bloody Mary Tudor and her tutor Fetherstone; the Stone Hall and its great fireplace bearing the Black Prince’s crest and the Minstrel Gallery. More recently, in the 19th century Hellens was owned by the Radcliffe Cooke family. Charles Radcliffe Cooke, born at Hellens, was the local MP. Known as the “Member for Cider” he was a passionate supporter of the farming industry in Herefordshire. He encouraged the growth of the cider industry, and was a great believer in the health-giving properties of cider. Our cider mill dates from his time.

In the early 20th century Hellens was rented for ten years to Ursula and Alex Whaley. Ursula was sister to Lascelles Abercrombie who founded the Dymock Poets. More information on the Dymock Poets can be found on the Dymock Village website. The house then passed to Lady Helena Gleichen, Queen Victoria’s great-niece, and sister to Dr Axel Munthe’s portrait painter, and thereafter to her cousin Hilda Pennington-Mellor. Hilda was also related to the Cookes, the Walwyns, and to the Dukes of Wharton. She and her son Malcolm Munthe created the charitable trust which runs Hellens today.

For the past twenty years, a group of NADFAS heritage volunteers (now The Arts Society), have generously donated their time and expertise to help conserve the historic fabrics and hangings in Hellens. On close inspection so many of the textiles in the house have been carefully stitched to prolong their life. Alongside conservation tasks, the group have also undertaken two original design projects: the music room curtains and a set of 10 dining rooms chair covers.

In 2011 NADFAS completed a pair of beautiful, hand-embroidered Crewel worked curtains to replace the existing threadbare brocades in the Music Room. Their design is based upon a traditional tree of life pattern, incorporating crests and imagery from within Hellens walls. Each member of the group created their own signature motif all of which have been cleverly woven into the design –look for dragonflies, bumblebees, hedgehogs and butterflies to mention just a few! The curtains took over 4741 hours to complete. In the spring of 2017, the group completed a set of needlepoint seat covers for the chairs in the White Dining Room, inspired by the Tudor panelling of the room and a 17th century herbal found in Hetty’s room.

More recent projects include the conservation of an 18th century folding screen, due to be completed by the 2019 season, as well as an ambitious ‘Hellens Bayeux’ crewelwork frieze. The nine and a half metre long embroidery will illustrate the evolution of this ancient house through the ages and when completed will hang in the atmospheric minstrels gallery (definitely worth a return visit in 2021!)

A recently renovated building that we are using for residential courses and retreats. The building has been very sympathetically refurbished and incorporates many ecologically careful choices. We harvest rainwater for the flushing of the toilets, and have built a new plant room with a log burner to heat both the Georgian Stables and the other two barns on site, using timber extracted from Hallwood.